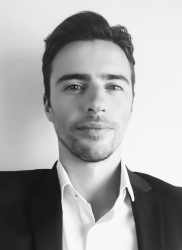 Roman Vogdt
Head Cinephile, TV Geek and Superfan at Data Stream Diva
Roman fell in love with the art of filmmaking when he was just a small child. While it had originally started off as a passion, it's now turned into a full-blown obsession. He thinks there's nothing else as cool as creating your own world and characters. And as much as he loves creating his own stories, he loves being thrown into other people's imaginations by watching movies. In Roman's mind, there's no better escape from the stressors of reality than by spending a few hours in someone else's world.

HBO has just released The White Lotus, a reasonably entertaining but quite dark new comedy-drama set against a backdrop of mysterious murders.

Written and directed by Mike White (Illustrated), the series’ events unfold during one fateful week at a luxurious Hawaiian resort as the lives of the new wave of guests become insidiously intertwined.

The series begins with Shane, played by Jake Lacy, sitting in an airport terminal, looking lost. We learn from other indiscreet travelers that there has been a murder at the White Lotus, the hotel where Shane has just finished his stay.

The White Lotus is a complicated series to categorize. It’s a “who done it,” but it’s also a satire about the privileged rich and their eccentricities amidst a staff of modest employees who must deal with their demands.

It’s a comedy with some dramatic elements, but the tropical side gives it a slight summer feel, making it the perfect series for summer vacation.

Mike White knows how to mix the odd genre and humor that makes you uncomfortable with a touch of existential crisis. His look at these privileged people and the employees of this hotel is fascinating to watch, even though at times it could use more depth.

But the actors are fabulous, the cast is very well chosen, and each one brings his talent, particularly Murray Bartlett, perfect in handling unpredictable and falsely ass licking, or even Molly Shannon, who comes later in the series as an overprotective and invasive mother.

A Pleasant Surprise In Paradise

This show is not one to knock off the shelf in a long time. Quite many times, I was left in pleasant shock after an episode’s ending, hurrying to watch the next. HBO renewed the show for a second season despite it being originally intended as a one-season miniseries at first.

It’s rumored that each season will be centered around one character at a time, further developing the stories that already enticed us in the first season.

Very good directing by Mark White. I’ll be expecting to see more of him in the near future for different networks, usually very keen on picking up creators when their newest shows work so well.

Shows You´ll Enjoy If You Liked “The White Lotus”

Not so much as to quench the urge for more like this, I have put together several shows that are quite unique in their own way- similar to The White Lotus, are difficult to categorize, useful if you’re a bit tired of the same pattern being used to stereotype each kind of genre.

My recommendations would go along the lines of:

When the first season originally aired, all the attention was on seeing actresses who are more recognizable for roles in films such as Witherspoon and Kidman themselves, Laura Dern, or Shailene Woodley brought together in the same series.

It effectively painted the environment Jane (Woodley) had just moved into, a single mother of a toddler who finds herself in Monterey, California, with moneyed housewives who, for the most part, entertain themselves by gossiping, overprotecting their children, and judging everyone they think is not up to their standards.

The script is fabulous. I have not had the fortune of reading the book, although now I am curious about it. If we value what the audiovisual is -that is, not the adaptation- the timing and rhythm in each episode make the plot advance in an organic way.

There are no hiccups, no back-and-forth. Everything that is there is there because the plot demands it. Good performances, a great script, and superb direction. With a soundtrack (that opening with “Cold Little Heart” is worthy enough in of itself) and fascinating photography. In short, A highly recommended series.

This is a self-conclusive miniseries of eight episodes in which the important thing is, above all, the personal development and evolution of the characters.

If you have had the pleasure of reading the book, you will understand how important it is that they are well constructed so that their conflicts are credible, and that is one of the first virtues of the series: it has a cast that is 100% involved in the fiction.

Just with the magnificent opening credits, that manages to mix images, colors, and textures in a completely hypnotic way to create a psychotropic effect very much in keeping with the theme of the series: water, flowers, earth, fire, light, and stars to the rhythm of a version of “This Strange Effect” by The Shacks.

Nine Perfect Strangers propose a hallucinogenic journey into the inside of a handful of characters with whom it is easy to fall in love.

Only Murders In The Building

For Crying Out Loud

Only Murders in the Building is the new Star series on Disney+ starring Selena Gomez, Steve Martin, and Martin Short. This production mixes mystery and comedy around a crime to be solved in a large New York City building.

For some time now, the true-crime phenomenon has been on the rise. This genre, which recreates a real crime in detail, is parodied in Only Murders in the Building, the new star series on Disney+.

With an apt mix of comedy and mystery, this production is getting a lot of buzz. Its basis is the peculiar investigation that three neighbors (played by Steve Martin, Martin Short, and Selena Gomez) conduct following the death of a stranger in their building in New York.

It’s actually very endearing to see how much Selena Gomez has grown through Disney Channel, embodying difficult roles like this one with ease.

For their part, Martin Short and Steve Martin are two icons of U.S. comedy from the last third of the last century. While Short was in Three Amigos, The Prodigy Chip, and Mars Attacks, Steve Martin was in Better Alone Than In Bad Company, Father of the Bride, and Sergeant Bilko.

Past and present united in a project in which the three of them, besides being protagonists in the show, appear as executive producers of Only Murders in the Building. And, in the case of Steve Martin, also as a screenwriter.

Father, Son, One And All

We could safely say that ‘Clickbait’ lives up to its name. Like all those headlines designed to lure us into empty content, the Netflix series does the same with an addictive and tasty crime drama. It’s easy to bite into, and once you’ve finished the main course, you’ll want more.

I’ve stayed. And like me, quite a few more people have because weeks after its premiere, it is still one of the most-watched on the platform. An unbeatable show that not even ‘Money Heist’ has managed to checkmate in these last glimpses of summer.

The eight-episode miniseries follows the story of Nick (Adrian Grenier). One day a video of him appears on the Internet, beaten and holding a sign that says “I abuse women” and that “At five million views, I will die.” A bit like Black Mirror’s first episode.

From here, a web of secrets and lies will be uncovered around Nick’s double life as Pia (Zoe Kazan), his sister, and Sophie (Betty Gabriel), his wife, try to understand what is going on. All this is in a plot orchestrated by Tony Ayres and Christian White.

What Would You Do For Love?

You is a thriller based around the concept of love and social media. Starring Penn Badgley, Elizabeth Lail, Luca Padovan, Zach Cherry, and Shay Mitchell.

Imagine a love story set in the 21st century about an obsessive but brilliant 20-something-year-old who uses the hyper-connectivity made available by modern technology to make the woman of his dreams fall in love with him.

Using the Internet and social media as his tools, he manages to gather her most intimate details to get closer to her and what started as a charming crush turns into an obsession as he strategically and quietly disposes of all the obstacles (and people) that get in his way.

Funny story: The Morning Show, created by consultant Jay Carson, ran into problems during the development phase – Carson stepped down over creative differences in 2018, and eventually, Kerry Ehrin (Bates Motel) serves as showrunner for the series. Talk about bad omens, but anything Jennifer Anniston is in, I will most probably like.

Aside from a catastrophic start off on Apple TV+, after watching its first three episodes, I discovered that it was far from being a perfect series, but that it had a lot of potential and the bad reviews I had read were a bit exageré.

Even though the number of premieres we have to be attentive to forces us to be more and more selective, sometimes we have to be patient because there is no magic formula that guarantees that a series will work. I, for myself, didn’t like Breaking Bad’s beginning but loved the rest.

Sometimes we are lucky, and all the elements fit together the first time, but others need a little time to grease their mechanisms; in the case of The Morning Show, my patience was rewarded, and from the 5th or 6th episode, I was hooked- the pros of streaming shows nowadays, huh?

Question: Why is it Called White Lotus?

Answer: The white lotus has meaningful symbology that refers to purity, cleanliness, recuperation, faith, etc. Obviously what this resort, aka The White Lotus, is meant to provide.

Question: Where was The White Lotus Filmed?

Answer: The luxurious retreat we see in the show is located in Hawaii, and it is a Four Seasons Resort at Wailea.

Question: Will There Be a Second Season?

Answer: Indeed, HBO has announced it will have a second, anthology-styled season.

The interesting part of White Lotus revolves around trying to portray that people aren’t as much bad or evil, as much as they are self-involved. The show has the fortune of having very good performers that nail their characters and give off the right expectations at the right moment.

Performances are downright hilarious at times, and having a second season will probably give them more space to develop. Things are looking good!