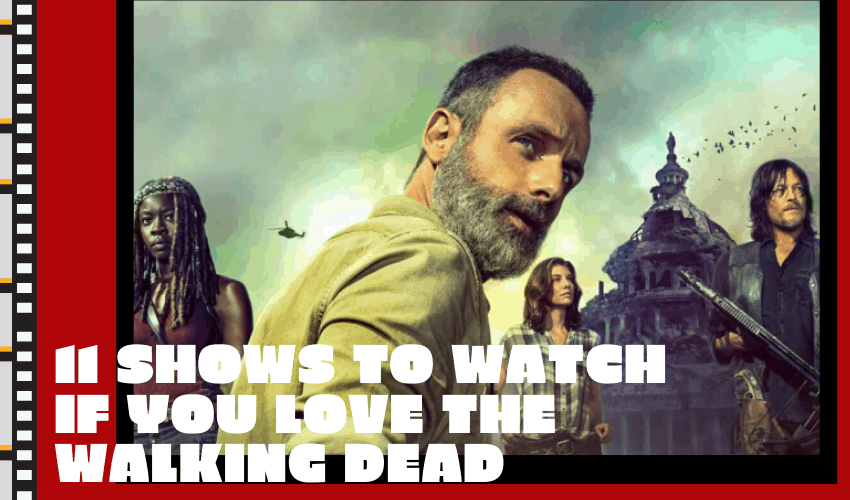 Latest posts by StreamEditor (see all)

Are you a fan of The Walking Dead? If you love horror or genre TV then you probably are. The Walking Dead brought dystopian drama to the mainstream TV landscape and is still one of the most popular shows on television. But there are some other great dystopian horrors and science fiction shows out there as well that you might have missed.

It’s similar in feel and style to The Walking Dead but the survivors face a different set of obstacles as they try to figure out what happened and how to survive. Fear The Walking Dead is heading into 6 this spring but the first five seasons are available to stream. The show went through a sort of soft reboot in season 4 that resulted in a major direction shift and some shuffling of characters.

There are also two fan-favorite characters from The Walking Dead who crossed over and now are on Fear The Walking Dead. Now is a great time to start watching the show so that you’re caught up before season 6 begins.

Fear The Walking Dead is available to stream on AMC and on Hulu. 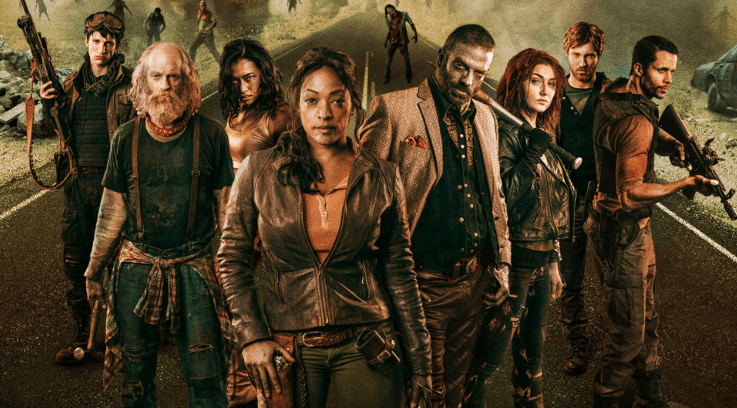 Z Nation is another apocalypse zombie show that features small groups of people trying to survive but it’s very different from The Walking Dead in a couple of major ways. The lead character, Murphy, was a prisoner at the start of the outbreak who was given a test vaccine that has made him immune to the zombie virus.

He is the only human known to have survived a zombie bite. The series starts three years into the apocalypse as a small band of survivors are trying to get Murphy to the last operational CDC facility in California. On their journey across the country, the survivors run into a lot of different obstacles that slow down their mission.

Z Nation is a lot rougher around the edges than The Walking Dead and it has a lot of camp and cultural humor that TWD doesn’t have, but it does have a similar gritty feel and of course, zombies.

Z Nation ran for five seasons on the SyFy channel and it’s now available to stream on Netflix. 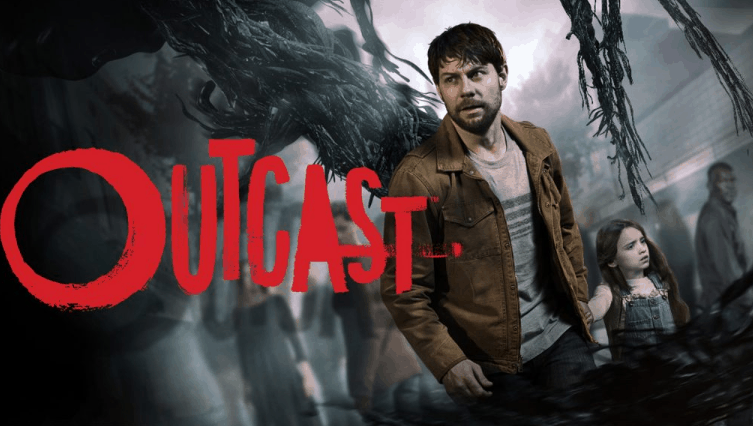 It followed the story of Kyle Barnes, a young man who was haunted by trauma that has occurred early in his life growing up in a town rife with demonic possession. When he returns to the town the possessions continue and intensify, leading some to think that he’s connected to them in some way.

Because this show was created by Kirkman it has a feel that’s familiar to fans of The Walking Dead but it’s also darker, a little edgier, and it uses the power of suggestion to create chills while not holding back on the visceral horror.

Even though critics and fans had good things to say about the show it only lasted for two seasons. It’s now available to stream on Cinemax, Amazon, and Hulu. 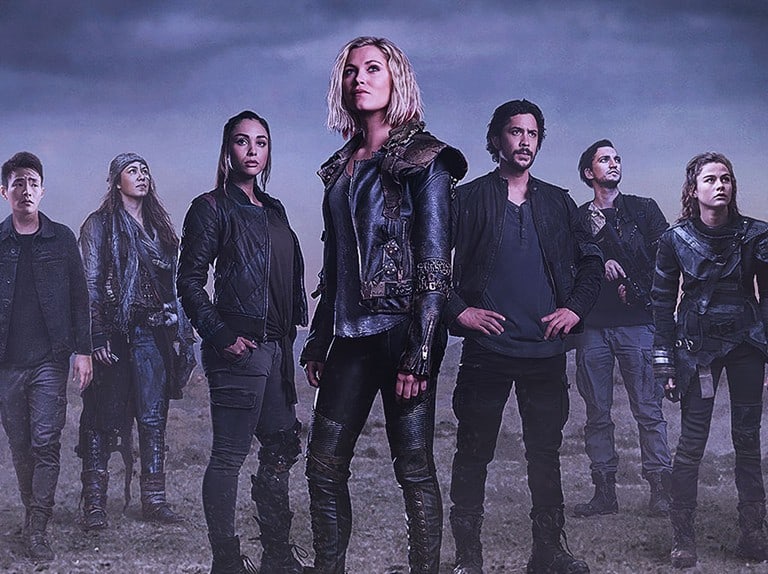 The 100 doesn’t have zombies like The Walking Dead, but it does have a fantastic post-nuclear apocalypse landscape including an impressive dystopian cityscape, Polis, and a mad scientist’s apocalypse lair. The premise of the show is that a group of human survivors fled Earth in the midst of a nuclear holocaust.

They have been living in space on a ship habitat and periodically send down a bunch of people to the Earth to see if it’s habitable. The story follows a group of young adults who are sent to the surface and find that Earth is finally habitable again, but there is a huge range of dangers on the planet including a race of fierce warrior survivors that the group calls Grounders.

It’s got many of the same survival elements that The Walking Dead has and has a similar feel. Also, Alycia Debnam-Carey, who plays Alicia Clark on Fear The Walking Dead, plays the leader of the Grounders, Lexa.

The 100’s last season will debut soon but the early seasons are available to stream now on The CW and Netflix. 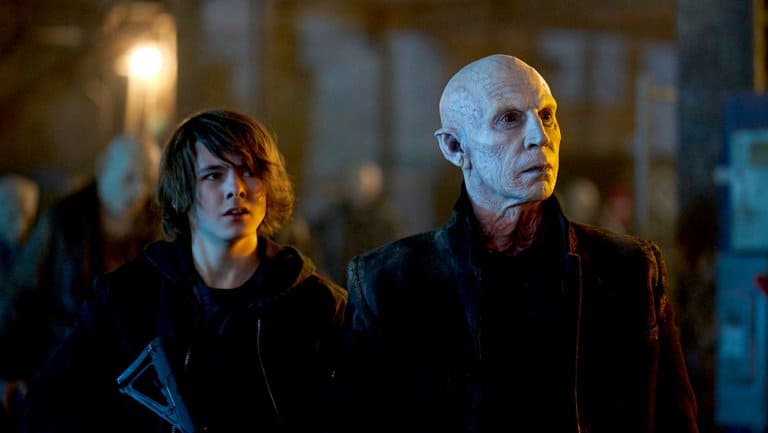 The Strain focuses on vampires instead of zombies but the modern-day setting makes it a more updated tale than a traditional Dracula-style story. The Strain was based on a trilogy of novels written by horror master Guillermo del Toro and Chuck Hogan.

Del Toro and Hogan also adapted the books for the show and wrote the pilot as well as being involved in other creative aspects of the show. The Strain’s main character is Dr. Ephraim Goodweather, who is a doctor and researcher at the CDC. When a plane lands full of dead people the CDC starts investigating and Dr.

Goodweather finds out that the deaths are tied to a viral outbreak that causes vampirism instead of the more traditional zombification. As the story goes deeper viewers learn that the virus is actually ancient and has a long and predatory history.

The historical nature of the virus is juxtaposed well with modern survival themes and makes the story feel both modern and timeless. It’s perfect for binging because once you get caught up in the story you won’t want to step away.

The Strain ran for four seasons and currently, it’s available to stream on Hulu. 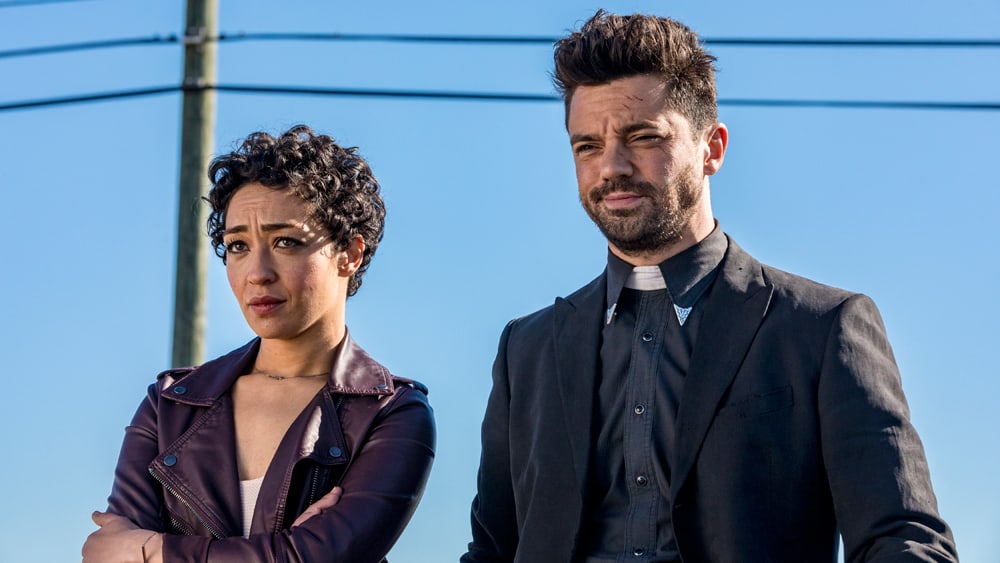 The preacher was a dark and sometimes campy cult-favorite show that ran for four seasons on AMC. It often followed The Walking Dead because there was a lot of overlap between the two fanbases. Preacher was based on the comic of the same name and it was adapted for TV by Sam Catlin, Evan Goldberg, and Seth Rogan.

Preacher followed the adventures of Jessie Custer, a preacher who finds himself in possession of supernatural powers after having a crisis of faith. He wants to find God and find out more about this power that he’s been given so he goes on a mission to find God with his vampire best friend and ex-girlfriend Tulip.

Preacher is violent and dark but also steeped in dark comedy with a lot of action. The surreality of the story at first seems very different from The Walking Dead but as the story unfolds there are common elements of trying to figure out how to survive within a world that seems unimaginable.

Preacher is currently available to stream on AMC and on Hulu. 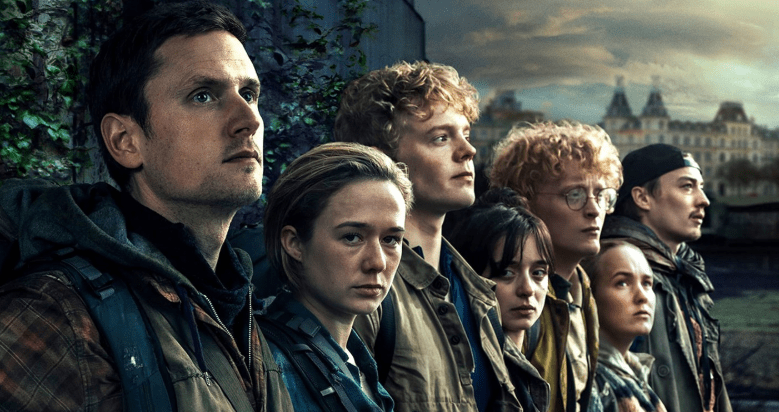 The Rain is a more traditional survivalist drama that’s very similar in some ways to The Walking Dead. It centers on a pair of siblings in Scandinavia who find shelter in a bunker when the rain that carries a deadly virus begins to fall. They stay in the bunker for several years but eventually are forced to leave to find supplies.

They also want to try and find their father, who was a researcher investigating the viral rain who never returned to the bunker. Hoping that they can find their father and that their father could have a cure they set off on a journey through Denmark and Sweden trying to find a safe community and their father.

Fans of The Walking Dead will pick up on some universal themes in The Rain like doing what it takes to survive, trying to process what a post-apocalypse society looks like, and searching for a lost loved one after the world ends. But the location and some of the things that happen to the siblings are very different than what occurs in The Walking Dead.

The Rain is a Netflix original series that will end with the upcoming third season that will be released sometime in 2020. You can stream the first two seasons now on Netflix. 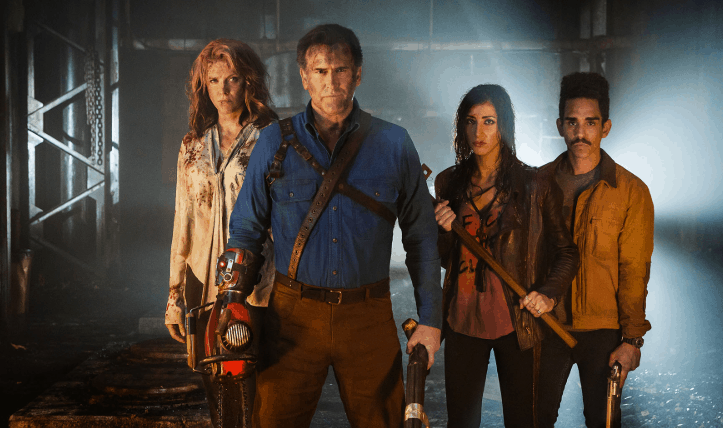 Ash Vs. Evil Dead is a TV show sequel to Sam Raimi’s Evil Dead film trilogy that is set in the same universe and is based on the events in the trilogy. Bruce Campbell reprises his role as Ash Williams. The TV show picks up 30 years after the events in the films.

Ash Williams has been unable to put the events in Army of Darkness behind him and he’s been working a series of dead-end jobs and has become the default caretaker of the Necronomicon. The people in his hometown, where he is now living, don’t believe his adventures and don’t believe that there is evil dead to be fought.

He and two of his friends eventually are forced to fight the dead in order to save humanity. The show shares some apocalyptic themes with The Walking Dead but has the campy and tongue-in-cheek humor that is a signature facet of the Evil Dead universe. The show ran for three seasons before being canceled.

You can stream all three seasons of the show on Netflix right now. 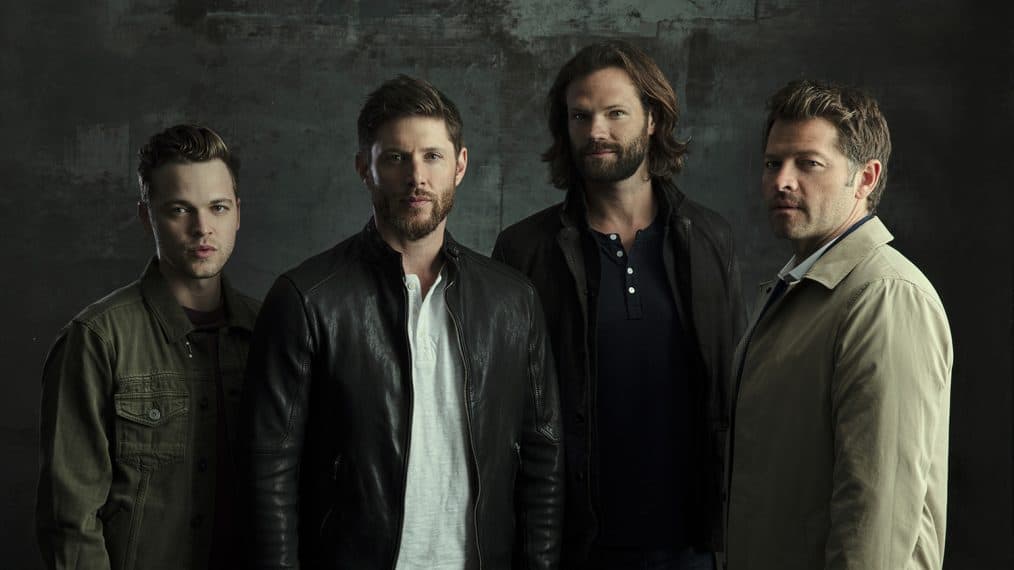 Supernatural isn’t an apocalypse survival show but it is a show that fans of The Walking Dead will like. Supernatural is about Sam and Dean Winchester, brothers who were raised by their monster hunting dad to be monster hunters themselves.

The show has a contemporary setting but in the world of the show monsters, demons, angels, and other supernatural figures share the modern world with humans. Humans are largely unaware of these supernatural beings but Sam and Dean spend their lives fighting supernatural monsters and helping people.

It shares themes of survival, alienation, and loyalty to a family with The Walking Dead but also manages to throw in some humor and absurdly comic storylines to keep things light. Supernatural is a leader in genre TV and has run for 15 seasons. The 15th season, which is on air currently, will be the last season of the show.

You can stream the first 14 seasons on Netflix. 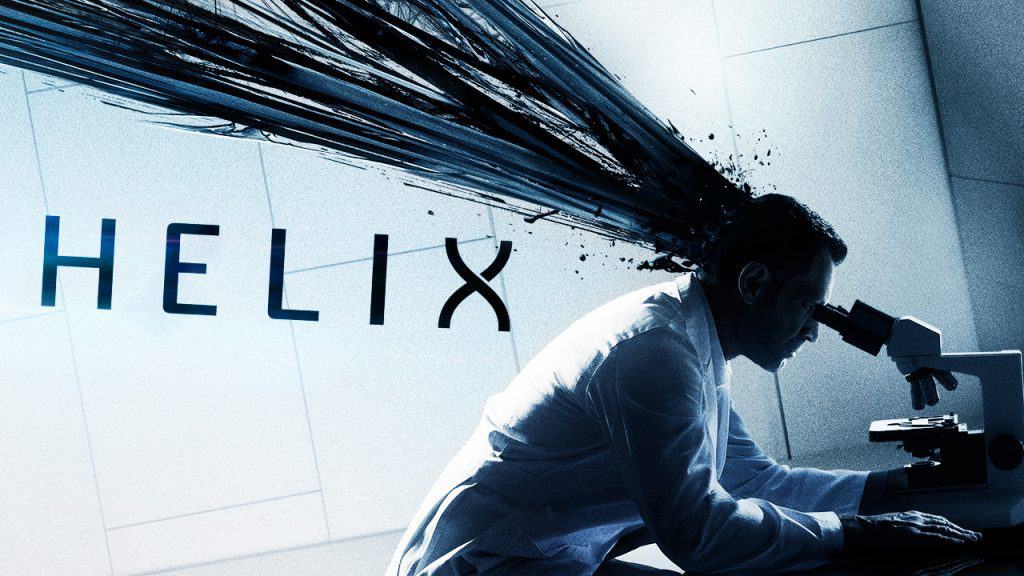 Helix is another outbreak drama, but with a snowy twist. Ronald D. Moore, who is best known for his work on the reimagined Battlestar Galactica and on Outlander, was an Executive Producer on this series. The show follows a small contingent of scientists from the CDC who go to a remote Arctic base.

A viral outbreak at the base causes havoc and death and scientists must fight the virus, figure out what it is, and stop it from spreading before it causes a worldwide apocalypse. In some ways Helix is a classic survival drama but the unique setting adds another layer to the story.

The group is trapped in the small remote base and the inaccessibility of the base makes it even more important that they figure out what’s going on in order to save their own lives because no one can get to them to help them.

Despite having a lot of potential Helix only ran for two short seasons. Both seasons are available to stream on Netflix. 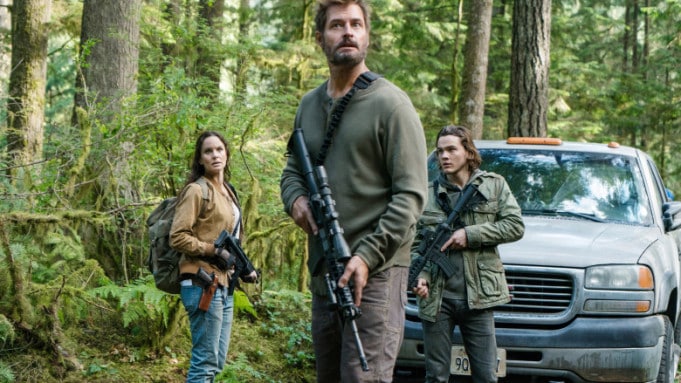 Survival is a key theme in Colony, but it’s surviving an alien invasion, not a viral outbreak or a zombie population. Sarah Wayne Callies, who played Lori Grimes on The Walking Dead, stars in Colony along with Josh Hollowman from Lost.

Colony starts out in a near-future dystopian LA. The US is under military-style occupation by a band of aliens who keep tight control over the “blocs” which are the areas of the city they have divided up. The remaining humans, who are used as slave labor, live under the close supervision of the aliens but underneath the surface resistance to alien rule grows and then erupts.

The show has the same taut drama and emotional intensity that The Walking Dead excels at as well as the same fight for survival. Whether it’s zombies or aliens humans fighting for humanity against non-human entities makes for compelling TV.

Colony ran for three seasons and is available to stream on the USA and Netflix.

Beyond the Aquila Rift Explained: What The Ending Really Means

The Miniaturist Explained: The Explanation You Need